"We're extremely honored to make the list as one of the top apartment firms nationwide," said company executive. "The ranking validates our business strategy and ability to serve thousands of residents on a daily basis."

"To Everyone on our team, we couldn't have done this without you. Thank you for being a part of this amazing group, where we... Live United. Work United."

NMHC partners with Kingsley Associates, a leading real estate research and consulting firm for the NMHC 50’s research and analysis. All apartment owners, managers, developers, contractors and syndicators are invited to answer a survey questionnaire that asks about their prior year activities. Apartment owners, managers and syndicators are ranked based on their portfolio holdings (either owned or managed) as of January 1, 2017, while developers and general contractors are ranked based on the number of units started in 2016.

For more details about the NMHC 50, visit www.nmhc.org/The-NMHC-50.

Based in Washington, D.C., the National Multifamily Housing Council (NMHC) is the leadership of the trillion-dollar apartment industry. We bring together the prominent apartment owners, managers and developers who help create thriving communities by providing apartment homes for 39 million Americans. NMHC provides a forum for insight, advocacy and action that enables both members and the communities they help build to thrive. For more information, contact NMHC at 202/974-2300, e-mail the Council at info@nmhc.org, or visit NMHC's web site at www.nmhc.org. 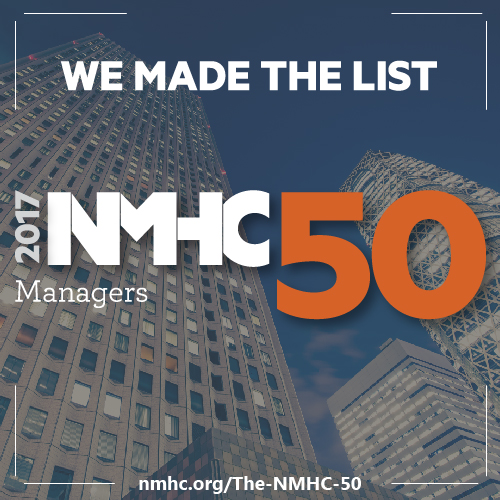